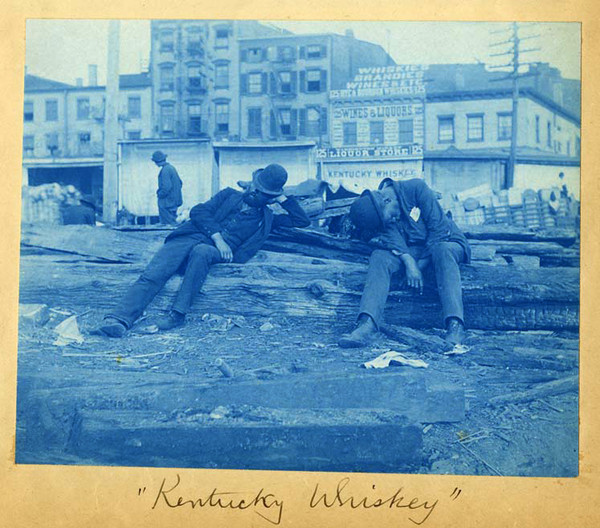 Cyanotype. Synonyms : Negative Cyanotype, Ferroprussiate, or Blue Process. A process discovered in 1842 by Sir John Herschel. It is called negative cyanotype because it produces copies of engineers' or architects plans with white lines on a blue ground, the action being the reduction of a ferric salt by light to the ferrous state, followed by the precipitation of Turnbull’s blue by the action of potassium ferricyanide.

The formulae below, though giving a slower paper than that used by engineers, yield excellent copies of drawings; in addition, paper sensitised as described is capable of yielding very presentable half-tone prints from any fairly contrasty photographic negative. The two give prints of nearly identical characteristics in most respects.

B gives slightly more contrasty prints than A, but paper prepared from the latter prints much more rapidly and yields a brighter blue. Either solution should be freshly prepared, and should be quite clear. Extra contrast can be obtained by adding a small amount of potassium bichromate to either formula.

The sensitising solution is spread over well-sized paper with a pad or brush, working in one direction, and then across to even the marks out. The paper is then hung up to dry, and appears of a greenish-yellow colour; and where the light acts on it it turns blue. After exposure it is merely washed in water, when the image becomes bright blue, and the ground, or unexposed portion, should remain quite white. The last wash-water should contain a few drops of hydrochloric acid.

Over printed proofs may be reduced, after thoroughly washing, by being dipped in a weak solution of ammonia or a 2 per cent solution of sodium carbonate, well washing, and then dipping into weak hydrochloric or acetic acid and well washing. Under printed proofs may be intensified by immersion in a solution of ferric chloride, nitrate, or sulphate, 3•5 parts to 1,000 parts of water, till the image appears darker in colour, and then well washing. Corrections, or taking out spots, etc., can be effected by touching the dry prints with a 4 per cent. Solution of potassium oxalate, with which also titles may be written; and if red aniline ink be added to the above, or 4 parts of oxalate be dissolved in 100 parts of the red ink, the title will appear red on the blue ground.

Positive Cyanotype, or Pellets Process. This process is the opposite to the last that is, it gives blue lines on a white ground from a plan, or, in other words, where the light acts no image is formed; only on those parts where the light does not act is a precipitate of Prussian blue formed by the action of the potassium ferrocyanide with a ferric salt. This process was also suggested by Herschel, but no satisfactory progress was made till Pellet patented in 1877 his process of adding a viscous substance to the sensitizing liquid.

For those of us used to seeing photographs in black and white, sepia or color, the cyanotype, or blueprint, comes as a surprise. The result of a printing process discovered by Sir John Herschel in 1842, cyanotypes provide a simple developing process using two chemicals in a photosensitive solution that can be applied to paper or other material. A positive image can be produced by exposing the material to sunlight. When the paper is flushed with water after exposure, the Prussian blue salts remain in the paper giving the print its intense blue color.

Sir John Herschel invented the cyanotype in 1842. The process depends on the photochemical reduction of ferric salts into ferrous salts leading to the formation of Prussian blue, an iron-based pigment. The process was used sporadically throughout the 19th century and more frequently in the twentieth century for the reproduction of architectural plans and technical drawings, called “blueprints." This project is made possible by a grant from the U.S. Institute of Museum and Library Services, grant number MA-10-13-0194.