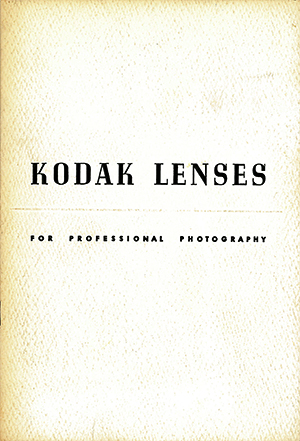 The choice of a really fine lens is perhaps the most important decision with respect to equipment the photographer is called upon to make. His future photography rests not only on the quality of the lens itself, but also on the suitability of the lens for the tasks it is to perform.

The drawing and perspective of the image formed by a lens depend upon the point of view—the camera position—not on the lens. However, the area of the scene covered, and the size of the image, is a function of the lens, and these in turn often are the factors which determine where the camera is placed. Thus the covering power and focal length of lenses regulate their suitability for a given purpose. In general, a normal lens will cover a film when the focal length is approximately the same as the film’s diagonal dimension. Focal lengths longer than this dimension will also cover the film but relative image sizes are increased and the area covered decreased. To decrease the image size from normal and increase the area covered, special lenses are employed called wide field or wide angle. These will cover a film satisfactorily even though their focal lengths are less than the diagonal dimension.