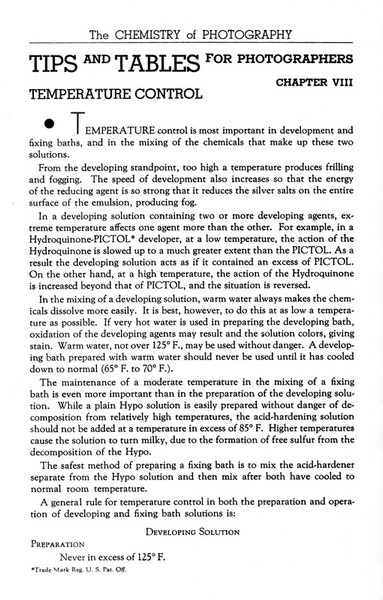 Tips and Tables for Photographers

Temperature control is most important in development and fixing baths, and in the mixing of the chemicals that make up these two solutions.

From the developing standpoint, too high a temperature produces frilling and fogging. The speed of development also increases so that the energy of the reducing agent is so strong that it reduces the silver salts on the entire surface of the emulsion, producing fog.

In the mixing of a developing solution, warm water always makes the chemicals dissolve more easily. It is best, however, to do this at as low a temperature as possible. If very hot water is used in preparing the developing bath, oxidation of the developing agents may result and the solution colors, giving stain. Warm water, not over 125° F., may be used without danger. A developing bath prepared with warm water should never be used until it has cooled down to normal (65° F. to 70° F.).

The safest method of preparing a fixing bath is to mix the acid hardener separate from the Hypo solution and then mix after both have cooled to normal room temperature.

A general rule for temperature control in both the preparation and operation of developing and fixing bath solutions is...(continued)