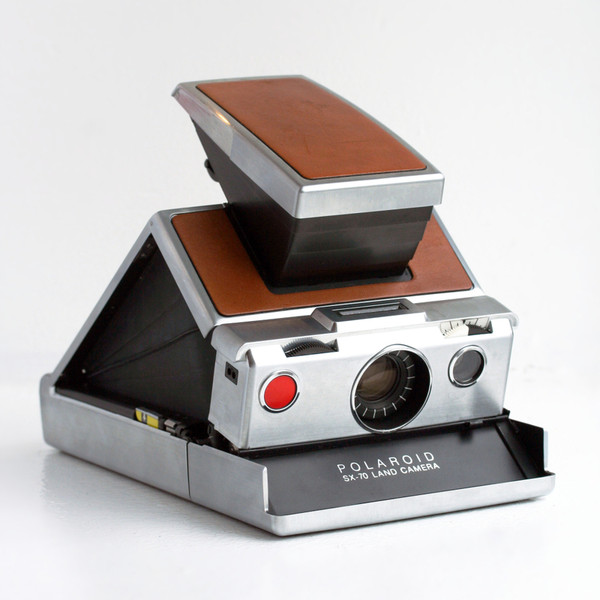 The SX-70 is a folding single lens reflex Land camera which was produced by the Polaroid Corporation from 1972-1981.

Pictures from the SX-70 ejected automatically and developed quickly without chemical residue. Polaroid founder Edwin Land announced the SX-70 at a company annual meeting in April 1972. On stage, he took out a folded SX-70 from his suit coat pocket and in ten seconds took five pictures, both actions impossible with previous Land Cameras. The company first sold the SX-70 in Miami, Florida in late 1972, and began selling it nationally in fall 1973. Although the high cost of $180 for the camera and $6.90 for each film pack of ten pictures limited demand, Polaroid sold 700,000 by mid-1974. In 19734, the Skylab 3 and 4 astronauts used an SX-70 to photograph a video display screen to be able to compare the Sun's features from one orbit to the next.

There were a variety of models beginning in 1972 with the original SX-70, though all shared the same basic design. The first model had a plain focusing screen (the user was expected to be able to see the difference between in- and out-of focus) because Dr. Land wanted to encourage photographers to think they were looking at the subject, rather than through a viewfinder. When many users complained that focusing was difficult, especially in dim light, a split-image rangefinder prism was added. This feature is standard on all later manual focus models.

Though expensive, the SX-70 was popular in the 1970s and retains a cult following today. Eminent photographers such as Ansel Adams, Andy Warhol, Helmut Newton, and Walker Evans praised and used the SX-70. Not until the $40 Model 1000 OneStep using SX-70 film became the best-selling camera of the 1977 Christmas shopping season, however, did its technology become truly popular.

Film for the Polaroid SX-70 Land Camera is still available thanks to the efforts of The Impossible Project, which saved the last Polaroid production plant for integral instant film in Enschede, Netherlands. Available films include the PX 100 Silver Shade Cool, PX 70 Color Shade Cool, and the new PX 70 Color Protection.

These films are also available from ContinentalPhoto.com, in Brooklyn, NY.