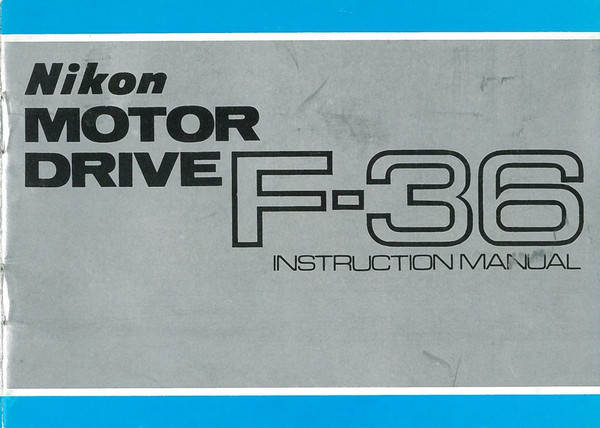 The standard back of the Nikon F is removed and is replaced by the F-36 drive unit. Unlike the future MD-2 Motor Drive designed for the Nikon F2 camera, use of the F-36 required a minor modification to the Nikon F body.

Early F-36 Motor Drives were powered by an external battery pack utilizing 8 "C" type batteries connected by a trailing power cord. Nippon Kogaku introduced the Cordless Battery Pack in 1966, which attached directly to the base of the F-36 to form a compact unit. It utilized eight AA-type batteries, with a push-button release located on the top of the pack's grip.

An accessory to your Nikon F, the F-36 Motor Drive opens new vistas of photographic opportunities. Attached as a substitute for the Nikon Fs standard camera back, this device advances the film and fires your camera automatically.

The motor drive may be operated either manually or by remote control using cables, timers or radio triggering equipment. You can adjust it to take single exposures or bursts of sequential exposuresas many as four frames per second.

To get maximum benefit from the F-36, read these instructions carefully and refer to them often until you are thoroughly acquainted with the motor drive.