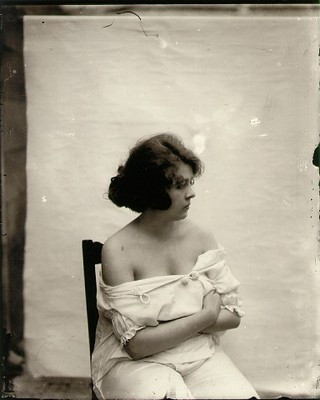 Collodio-Chloride Printing-out Paper. This was proposed by G. Wharton Simpson in 1865, and for some considerable time collodio-chloride was a very popular printing process. Except in the form of self-toning paper (q.v.) it is now practically extinct.

The following directions give a. simple résumé of the preparation of the ordinary (non-self-toning) paper.

Mix solutions C and D and add gradually to the collodion, and then add B very gradually with constant shaking, and finally 5 parts of pure glycerine. The emulsion should now be allowed to stand for six hours. Baryta or enamel paper is always used as the support, and the edges of a sheet are turned. up, the paper laid on a sheet of plate glass, and coated with the collodion just the same as though it were the glass itself. It is then allowed to set and dry.

Collodio-chloride paper is printed under a negative by exposure to daylight, after which it is washed, toned in a solution containing gold or platinum, fixed, washed, and dried. Printing should be carried to a good depth, especially with matt paper, as much density is lost before the print is finished.” Good tones can be obtained with any ordinary gold toning bath (see TONING), but at the time when the paper was popular it was generally agreed that the finest results were obtained by combined toning with both gold and platinum. A typical procedure for finishing the prints is as follows.

Give a preliminary washing lasting about ten minutes, the prints being kept well separated, and six or eight changes of water being given. Changes of water are often more certain than running water.

The toning baths are prepared as follows:

The prints should be toned to a chocolate colour in the gold bath if a. blue-black tone be wanted finally ; but shorter toning in the gold bath will lead to warmer tones being obtained in the platinum solution. The prints are now washed in about four changes of water, and are then placed in the platinum bath B. All trace of brown should disappear from the deepest shadows before the prints are removed, and as soon as toning is complete they should be Well rinsed in water, and then fixed in a weak solution (6 to 10 per cent.) of hypo. After the usual washing to remove hypo the prints are dried, and as the surface is not sticky, cloth or blotting paper may freely be used to remove surplus moisture.

Storyville Portrait, by Ernest J. Bellocq, ca. 1912. E.J. Bellocq, 1873-1949, remains an ambiguous figure in history. Following his death in 1949, eighty-nine glass plate negatives of portraits of female prostitutes from New Orleans’ Storyville district were found in his desk. All of the images were taken circa 1912. Photographer Lee Friedlander acquired the Storyville Portraits and has made contact prints of the 8 x 10 negatives on the same gold toned printing out paper that Bellocq used in his rare prints.