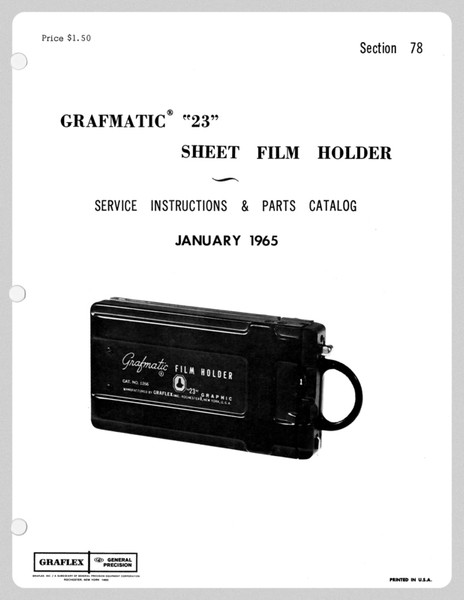 This section of the Service Parts Manual covers the Grafmatic “23”. The text and illustrations cover disassembly, cleaning, reassembly, operations, troubles, and lubrication.

The Grafmatic film holder is an automatic magazine holding six individual sheets of cut film. Besides indicating the exposure number, it has an indicator to tell whether the film is in the exposed position or covered. If the Grafmatic holder is used in a 2¼ x 3¼ Graphic Back, an additional set of spacer washers may be required beneath the focusing panel springs at the point of attachment to the camera to allow easier insertion of the holder. Since Graphic Backs do not lock the Grafmatic in place, be careful not to pull the holder out or lift during the cycling operation.

Two movements are required — PUSH and PULL. When pulling the slide or film compartment, pull straight outward — not backward — to avoid leverage pressure against the focusing panel or slide locks with possible danger of light leak. First check to see that the exposure counter dial is turned (use the edge of your thumb) so that number “1” appears, and that the chrome slide lock hook is turned to allow operation of the dark slide.

Pull the slide all of the way out and push it all of the way back. The first film septum will spring upward and be locked in the exposed position and the red dot at the back of the holder will be uncovered indicating that a film is in position ready for exposure.

After exposure the first film must be moved out of the way. To do this, press down with your thumb on the chrome latch, holding it against the slide handle, and PULL the entire film compartment all of the way out. Release the latch and PUSH the entire compartment in with the handle. When it is all of the way in, the exposure counter dial will move to No. 2. and the red dot will be covered indicating that the film is covered and the holder can be removed from the camera.

The same sequence is followed for all six exposures, after which an “X” will show on the exposure counter dial and the slide will be locked into the compartment indicating that you have made six exposures.

NOTE: The Grafmatic holder must be in the camera when the septums are being shifted. The film will be fogged if the film compartment is opened when the holder is not in the camera. To prevent accidental opening of the drawer, be sure the counter dial is set at a numbered position. To release the slide for recycling or loading turn the dial to No. 1.

To load or unload the Grafmatic film holder set the indicator dial on a number, press the chrome latch towards the handle and pull the film compartment out. Hold the compartment in this extended position, and PUSH the slide handle in until it releases the chrome latch, then PULL the slide out. The film septums have springs under them and will pop up. When loading the septums, keep the film notch over the notch at the open edge of the septum.

Before putting the septums back into the compartment, be sure that the counter slide, by the felt strip, has been pushed back out of the way, into the end of the film compartment.

CAUTION: When the holder is open for loading, note that slight pressure on the button on the underside of the film compartment will release the automatic exposure counter slide. If the holder is laid on a flat bench, no difficulty will be encountered; otherwise, it will be necessary to make sure that this slide does not extend into the septum chamber before attempting to insert the septums — failure to do so may result in jammed and bent septums.

When loading septums into the film compartment use the thumb and finger, holding them to act as a channel, guiding the septums down into place. All six septums must be in the compartment in order to operate the counting mechanism.

Many troubles encountered by the repairman will be very obvious, while others will not be too apparent. The following table of potential troubles, causes, and remedies is supplied so that difficulties may be promptly recognized and proper steps taken to overcome them. Before disassembly check for loose or missing screws and sliding surfaces that are binding because of lack of lubrication... (continued)