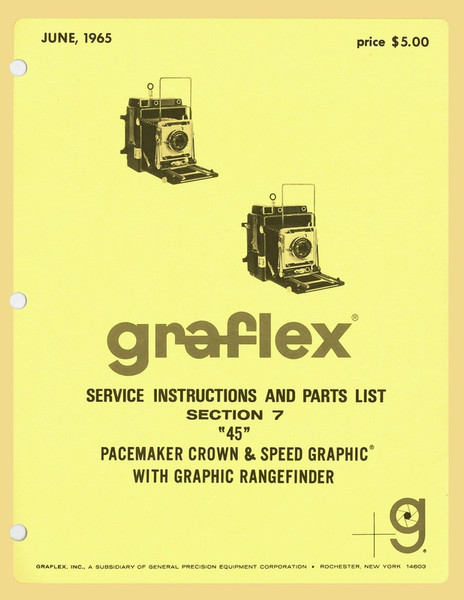 Manufactured by Graflex since 1955

This section of the Graflex Service Parts Manual covers the service of the Pacemaker Speed and Crown Graphic “45”, with Graphic Rangefinder with Viewfinder and Rangelite. (Manufactured by Graflex since 1955). The text and illustrations are based on the “45” Pacemaker Speed. The Speed and Crown are partially identical in construction and service; however, the differences are described in the text.

The column titled “Figure and Index No.” contains the index number in disassembly order of the items illustrated. Do NOT use the figure or index number in correspondence - specify the catalog or part number and name.

The column titled “Nomenclature” (including numbered columns) lists item nomenclature on the Graflex drawing. The assembly in the column marked “3” will be a component of the first assembly which preceded it in the column marked “2”, etc. The code “NP” will indicate that this part is “not procurable” and that the “next higher assembly” (NHA) should be ordered. The code “AR” is used for bulk items when an indefinite amount may or may not be used “as required.” The code “LP” is used when an item may be “locally purchased.”