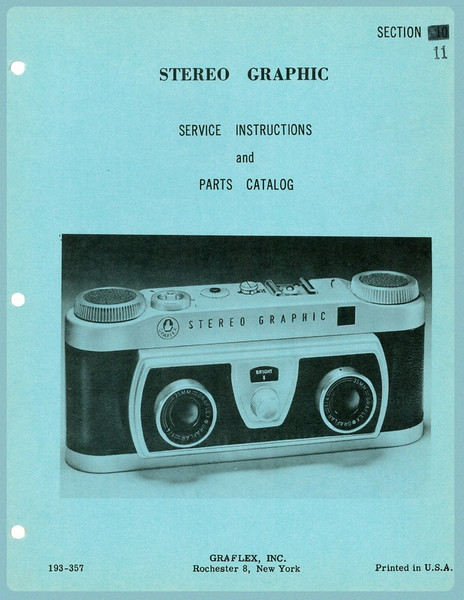 NOTE: Preliminary instructions for the service of the StereoGraphic Camera; this will provide information to explain the camera operation, disassembly, reassembly and adjustments required.

a. Film Advance. Turn film advance knob which is screwed onto film take-up spool. The take-up spool gear drives through two idler gears (fig. 2), the counting gear to the clutch gear. In operation, three bosses inside the clutch gear couple with three slots of the clutch to turn the keyed clutch shaft. The clutch shaft is keyed into the film sprocket to meter and pull film from supply cartridge.

b. Shutter wind. As the sprocket is turned, the ratchet spring (fig. 5) on bottom engages and turns bevel drive gear. The bevel drive gear turns the cocking bevel gear that winds shutter drive spring. At this time, the crank disc is under tension of the shutter drive spring against the release lever. The winding continues until a stud on top of the bevel cocking gear comes up against a stud on the bottom of the crank disc.

a. Instantaneous. The release button on top of the camera is pressed. The release lever (fig. 6) is depressed on one end and the opposite end is lifted from in front of the boss on the crank disc. The crank disc rotates under tension of the shutter drive spring. The crank disc, connected to the shutter drive gear on the shutter and diaphram plate, turns the shutter discs simultaneously to make the exposure. Exposure is about 1/50 second, 18 to 24 ms. b. Bulb exposure. The bulb exposure lever, attached to the top cover normally restricts operation of the bulb lever. When the indicator on the top cover is turned, it will swing the bulb exposure lever to the side and allow movement of bulb lever when exposure is made. The bulb lever is coupled to the release lever by a spring and the two levers now swing together. c. Synchronization. Synchronization is obtained when the synchronization (stop) gear rotates. A boss on this gear presses the short contact against the longer contact to complete the circuit to the shoe on the top cover. Synchronization is for type M flash lamps, 11 to 18 ms delay. adjustment is made by rotating the eccentric stud of the synchronization eccentric (34888) to change the distance between the contacts.

1.3. Rewind Film. During rewind, the rewind button on top cover is depressed and held. This pushes the clutch disc out of normal engagement with its clutch gear (fig. 2) and top gear train does not operate... thus, the sprocket can rotate in the opposite direction. The non-return spring (fig. 5) prevents turning the crank disc and operating the shutter during rewind.

(Figure 1 is numbered in disassembly order.)