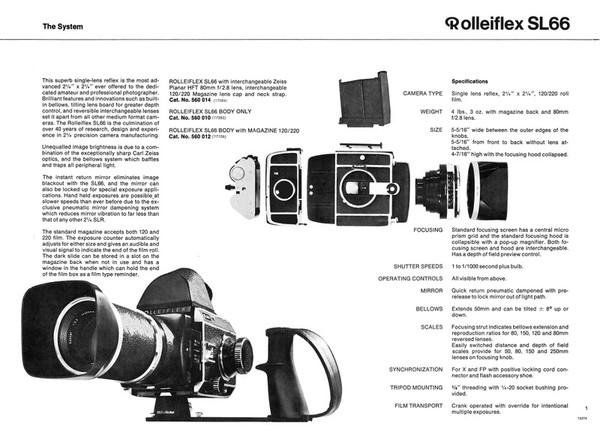 This superb single-lens reflex is the most advanced 2¼ x 2¼ ever offered to the dedicated amateur and professional photographer. Brilliant features and innovations such as built in bellows, tilting lens board for greater depth control, and reversible interchangeable lenses set it apart from all other medium format cameras. The Rolleiflex SL66 is the culmination of over 40 years of research, design and experience in 2¼ precision camera manufacturing.

Unequalled image brightness is due to a combination of the exceptionally sharp Carl Zeiss optics, and the bellows system which baffles and traps all peripheral light.

The instant return mirror eliminates image blackout with the SL66, and the mirror can also be locked up for special exposure applications. Hand held exposures are possible at slower speeds than ever before due to the exclusive pneumatic mirror dampening system which reduces mirror vibration to far less than that of any other 2¼ SLR.

The standard magazine accepts both 120 and 220 film. The exposure counter automatically adjusts for either size and gives an audible and visual signal to indicate the end of the film roll. The dark slide can be stored in a slot on the magazine back when not in use and has a window in the handle which can hold the end of the film box as a film type reminder.

5-5/16 wide between the outer edges of the knobs. 5-5/16 from front to back without lens attached. 4-7/16 high with the focusing hood collapsed.

All visible from above.

Quick return pneumatic dampened with prerelease to lock mirror out of light path.

For X and FP with positive locking cord connector and flash accessory shoe.

2. Close-up and macrophotography without accessories.

3. Depth extension by tilting the lens.

The bellows has a 50mm extension. Using only 7.5mm of this covers a focusing range from infinity to 3-1/3 feet (1 meter) with the standard 80mm f/2.8 Planar lens. The remaining extension serves for short distances. The drive rail carries magnifications and exposure factors for three lenses (80, 120, 150mm). This allows the Rolleiflex SL66 to be set directly to any desired scale of reproduction while immediately reading off the exposure correction. An additional millimeter scale simplifies precise settings, used in copying work, for example.

The front bayonet lens mount of the Rolleiflex SL66 is designed to take the 50, 80 and 120mm lenses in reverse position as well as normal mounting; the so-called Rollei Retromounting®. Only the Rolleiflex SL66 offers this feature. It has two advantages: larger reproduction ratios can be attained and, when photographing at greater than 1:1, far superior optical performance can be achieved.

The Rolleiflex SL66 lens can be tilted up or down to 8° relative to the film plane. This satisfies the optical requirement for extended depth (the so-called Scheimpflug principle or condition). This is one of the unique features of the SL66no other 2¼ SLR has this capability. With the 8° tilt of the standard 80mm f/2.8 lens, a flat inclined surface can be photographed from about 34 inches to infinitywithout stopping down. Less than flat subjects can also be brought into the depth of field zone with some stopping down.

In addition to visual screen focusing, there is an indicator chart supplied with the camera permits precision settings and exact determination of the depth of field zone.

The depth tilt feature of the SL66 provides the photographer with a tool for exploring a new dimension of creative freedom. The creative photographer will constantly find greater and greater opportunities to utilize this unique featurefor example certain architectural details and subjects, model shots, art, historical reproductions (ceiling decorations), advertising photography, product shots, and even close-ups.

An outstanding new ultra wide-angle lens for Rolleiflex SL66 has a 180° diagonal angle of view. The oblique illumination on the film is exceptionally high right to the corner of the frame. This lens produces remarkably good information even at 180°. Center of field is relatively large scale i and absolutely linear, i.e. without distortion. The high relative aperture effects easy focusing. (The incomparably brilliant screen of the SL66 makes focusing easy with any lens.)

The image field has a finite size even at 180°, i.e. it covers the entire formatin difference to some lenses only producing a circular image. Light falloff is not obtrusive even at 180°.

Correction is outstanding for all monochromatic and chromatic aberrations. Distortion in no way effects sharpness of definition even when the lens is wide open.

A superb technical and creative tool for exaggeration and innovation and without limitation as to applications.