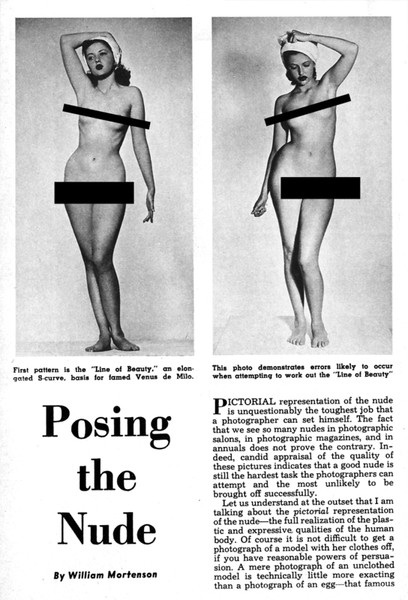 Posing the Nude by William Mortenson [sic] - Photography Handbook No. 12

PICTORIAL representation of the nude is unquestionably the toughest job that a photographer can set himself. The fact that we see so many nudes in photographic salons, in photographic magazines, and in annuals does not prove the contrary. Indeed, candid appraisal of the quality of these pictures indicates that a good nude is still the hardest task the photographers can attempt and the most unlikely to be brought off successfully.

Let us understand at the outset that I am talking about the pictorial representation of the nude—the full realization of the plastic and expressive qualities of the human body. Of course it is not difficult to get a photograph of a model with her clothes off, if you have reasonable powers of persuasion. A mere photograph of an unclothed model is technically little more exacting than a photograph of an egg—that famous first assignment. But a photographer who starts a nude sitting has about the same mathematical chances of producing a picture as he would if he started out to secure a portrait of the Dalai Lama in his bath.

If I can speak with authority on anything, it is on the theme of the prodigious difficulties involved in photographing the nude. I was callow and hopeful once, too. It is now nearly thirty years since I assembled a yard of crepe de Chine, a game but slightly apprehensive lady friend, a 4x5 Kodak, stowed them all in the side car of my motorcycle, and chugged away into the hills to devote an afternoon to the creation of a masterpiece. Since that occasion (on which I failed to secure the expected masterpiece) I have worked incessantly on the problem. I long ago lost count of the number of models who have posed for me; but it must be something like a thousand. As for the number of exposures made, the figure approaches astronomical proportions. Out of all this, I have secured possibly four or five nudes that please me. There is a considerably larger number, of course, that will “get by,” and these give me pleasure for a while; but they eventually pall and I get back to my original set.

After this build-up about the difficulty of nude photography, it may seem extraordinary to suggest that all photographers should experiment with it, but I believe such is the case. Just as anatomy and the “life class” are an essential part in the education of any painter, so experience with the difficulties of the nude is important in making a photographer. To anyone who deals pictorially with the human figure, who records fashions, or who makes portraits, such experience is essential. He cannot deal competently with the clothed...

William Mortensen (1897—1965) was an American art photographer, primarily known for his Hollywood portraits in the 1920s-1940s in the pictorialist style.

Mortensen began his photographic career taking portraits of Hollywood actors and film stills. In 1931, Mortensen moved to the artist community of Laguna Beach, California where he opened a studio and the William Mortensen School of Photography.

He preferred the pictorialism style of manipulating photographs to produce romanticist painting-like effects. The style brought him criticism from straight photographers of the modern realist movement and, in particular, he carried on a prolonged written debate with Ansel Adams.

Recent years have brought praise for Mortensen’s development of manipulation techniques and a renewed interest in his work.

He wrote nine books about technique in photography in conjunction with George Dunham.

Mortensen was awarded the Hood medal from the Royal Photographic Society in 1949.

THE COMMAND TO LOOK: The Story of William Mortensen

A Revival: The Strange Case of William Mortensen