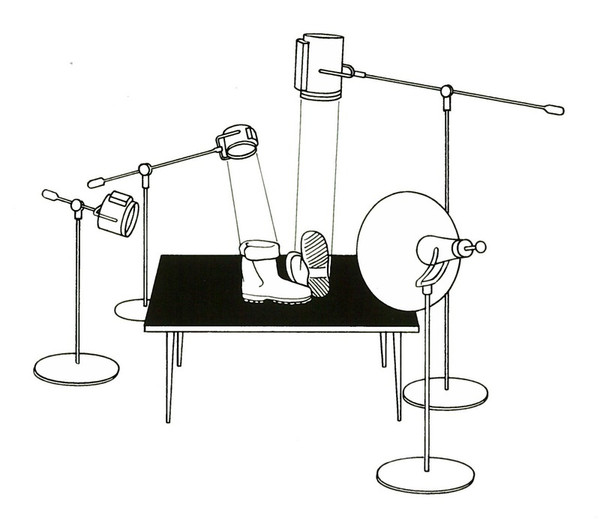 Lighting which Will emphasize properly the surface irregularities known as “texture” must have two attributes: The dominant main light should glance obliquely across the surface of the subject at a low angle in relation to the surface. If it will help in the conception, think of skidding this main illumination off the subject’s surface and across the grain or ribbing to be emphasized. Secondly, a weaker amount of shadow illumination should be used than is normally the case. However, in most instances, the illumination is vitally necessary to create the feeling of smooth, desirable texture; otherwise, the lighting would be too contrasty—a point not always recognized by some photographers.

From the client’s standpoint, an accurate representation of his product, with emphasis on its good features, is of utmost importance. Thus, as an example, if a pair of snow boots features a new type of slip-proof tread, the lighting should do its pait to emphasize this feature. The texture can be minimized with flat frontal lighting, as it is in the illustration at the left. Or, it can be over-emphasized, with strong oblique lighting and lack of illumination. Or, as shown above at the right, the two sources can be in excellent balance to give the desired, as well as accurate, impression of the product.

In this case, the main light was also the light which provided the desired subject texture. As can be seen from the lighting diagram, it was positioned high, to the right of the subject, and at an angle that would both illuminate the front surface adequately and provide illumination fairly oblique to this surface to emphasize the “hills and valleys.” A snoot on the front of the main light made its illumination rays even more parallel than would have otherwise been the case.

One of the most helpful ways to become proficient in lighting arrangements is to reconstruct mentally the lighting that must have been used in any commercial illustration. Look through magazines and catalogues so that you can study their good photographs. In doing so, use the reflections and the shadows as clues to (a) how many lights were used, (b) what kind of light each of them was, and (c) where each of them was placed. With practice, you should be able to envision the lighting setup for nearly any picture. Furthermore, this should help you to clarify your thinking and actually save you studio time in setting up lights for future assignments.