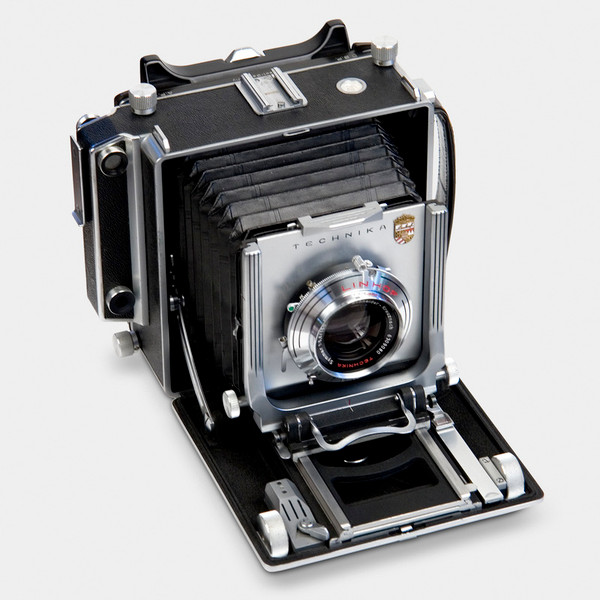 The Linhof Technika III, Type 5 (or Version 5) was a transitional model between the Tech III and Tech IV, being the only Tech III model to feature the now familiar reinforced angular front door design. It was produced for approximately one year until it was replaced by the Tech IV. The Type 5 was the first Technika to be factory-fitted with the international, or Graflok Back.

Originally introduced by Schneider Optics in 1920, the Symmar is a 6-element, 4-group, symmetrical lens design with a 70° angle of coverage. Constructed, like most large format lenses, with two cells fit into the front and back ends of a leaf shutter, Symmar lenses are “convertible”. One can create a lens with a substantially longer focal length by removing the front or rear cell and using only half the lens. This was especially useful for portrait photography, as the resulting longer focal length lens produced a softer image.

Because of their similarity to the Graflex Speed and Crown Graphic cameras, Technikas are often referred to as “Press Cameras”. However, while both offer fast 4x5 operation, Press Cameras do not have back movements. The Linhof is, therefore, more accurately referred to as a “Technical Field Camera”.

In all there were five versions of the Tech III. With the rangefinder, it was referred to as the Super Technika, simply Technika without the rangefinder.