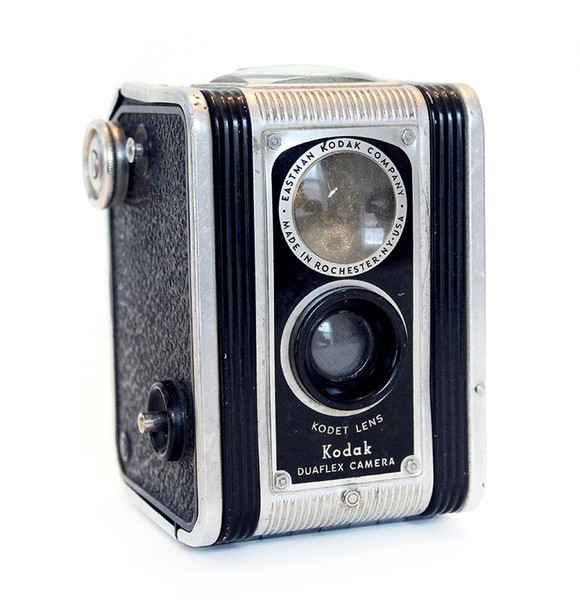 The original Kodak Duaflex camera was available in the United States from December 1947 through September 1950 (1949  1955 in the United Kingdom). They were produced by Kodak in the US, Canada and the UK. The last production model, the Duaflex IV, was discontinued in March of 1960.

The Duaflex was a pseudo TLR camera, mimicking the shape of a Twin Lens Reflex camera, but lacking any coupling mechanism between the taking and viewing lenses. The finder is essentially an oversized brilliant finder, as found on early Kodak Brownie cameras, not a true reflex finder with a ground glass indicating the focus. Pseudo TLRs were produced by many manufacturers, and were vogue during the 1950s and 1960s, when the Rolleiflex was the typical professional camera.

The various Duaflexes had Bakelite (Kodadur) bodies with metal trim and fittings, and were available with either a 72mm f/8 Kodar triplet lens in a front-element focusing (to 3.5 ft.) mount, or a simple fixed focus 75mm f/15 Kodet lens. The Kodar lens had Waterhouse stops of f/8, 11, and 16. The shutter had speeds of "I" and "B", and was synched for use with a Kodalite Flasholder.

Early models (Duaflex and Duaflex II) had a dedicated Duaflex Flasholder, which was synchronized for SM and SF bulbs when the camera was set on "I". No. 5 and No. 25 bulbs could be used, but the "B" setting was required for those types. Later models (Duaflex III and IV) were modified to accept the aforementioned Kodalite Flasholder, which was also used on the Brownie Hawkeye Flash Model and other Kodak models.

The Duaflex line had a special double-exposure prevention feature, where the shutter couldn't be activated until the film had been advanced to the next exposure. The feature could be manually overridden by pushing the little lever below the shutter button for deliberate double exposures.