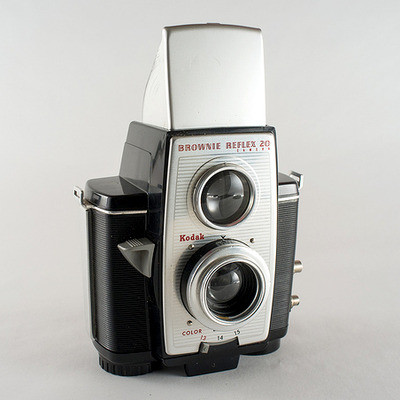 The Kodak Brownie Reflex 20 is a molded plastic box camera introduced in April 1959, and discontinued in January 1966. It produced twelve (12) 6 x 6 cm images on Kodak 620 rollfilm. In fact, it may have been the last 620-film camera to be produced by Kodak. It was manufactured in the United States and the United Kingdom (1960-65).

The Brownie Reflex 20 featured a Meniscus f/11 lens with rudimentary focusing, an instantaneous shutter with a single speed of 1/40 of a second, Pin & Screw flash contacts, and a large brilliant viewfinder with a built-in hood. Like the Kokak Duaflex, it was a pseudo TLR camera, mimicking the shape of a Twin Lens Reflex camera.

Because of their large brilliant finders the Brownie Reflex 20 cameras, like the Kodak Duafex, are an excellent choice for Through the Viewfinder (TtV) photography.

Here's an excerpt from a period Brownie Reflex 20 sales brochure:

If you like to hold your camera at waist-level and see a nice big clear image in the viewfinder before you snap get a picture 'pre-view' in fact the 'Brownie' Reflex 20 is probably the camera for you. The hood, which helps to shade the viewfinder and produce a brilliant image, folds flat when not in use.