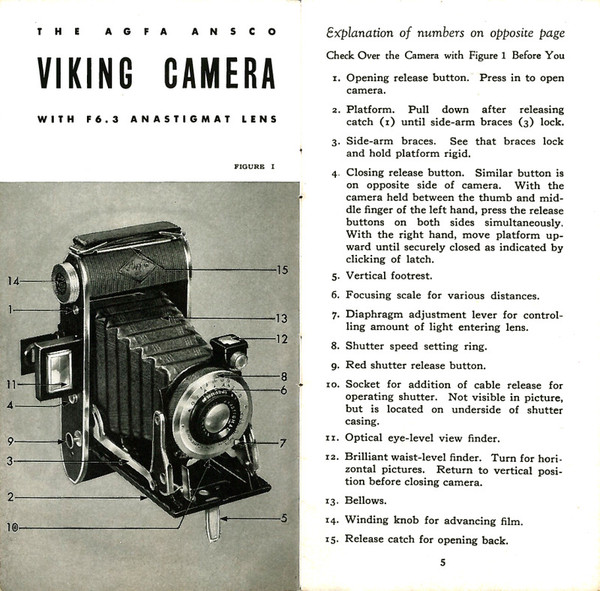 INSTRUCTIONS FOR THE USE OF THE VIKING CAMERA

The Agfa Viking Camera has been skillfully designed to enable you to secure excellent results without possessing special photographic knowledge. However, for best results, you must follow a few, simple instructions. Clear, sharp pictures are the results of having carefully made a few, easily memorized adjustments before each exposure. These instructions explain each operation of the camera, and you will be repaid with better pictures if you read the following pages carefully before making any exposures.

If you desire additional information on camera operation and picture-making, read Better Photography Made Easy, a particularly helpful, 60-page booklet published by Agfa Ansco and sold by most photographic dealers at $.25 per copy. Agfa Ansco also maintains a special department to answer your inquiries and help you in your photographic problems.

The PD16 Viking takes 8 pictures 2½ x 4¼ inches on PD16 roll film. For best results, use one of the several types of Agfa film available in this size, every film guaranteedPictures that Satisfy or a New Roll Free.

The focusing scale will be found on the top outer edge of the lens barrel, and will be identified by the series of figures running from 5 to Infinity. See illustration of lens mounting, Fig. 4. If the object to be photographed is 10 feet away, revolve the lens barrel until the figure 10 is opposite the indicating arrow between the words Agfa and Ansco on the circular plate above. Distances from the lens to all objects from 5 to 50 feet should be estimated as accurately as possible and set on the barrel. For subjects at a distance of over 50 feet, the barrel should be set at INF, or Infinity.

To use as a fixed focus camera, set the lens barrel at 15 feet and the diaphragm at 16. Thus everything from 9 feet to 43 feet will be in focus. The operation of the diaphragm is explained under the heading Diaphragm.

The shutter is the mechanism which actually makes the exposure when taking a picture. Simply expressed, it does nothing more than uncover the lens for a very short period of time so that light from the object photographed may pass through the lens and project an image upon the film. However, it does this uncovering job with a very high degree of accuracy and with a suitable range in speed. Thus the portion of light admitted through the lens may be a very small one, such as that when the shutter is operated at one hundredth of a second, or a larger portion such as that when the shutter is operated at a twentyfifth of a second.

TO REGULATE THE SHUTTER SPEED

To set the shutter for any of these speeds, turn the ring (8, Fig. 1) until the black line is directly over the desired figure. In the shutter illustration, Fig. 4, the shutter is set for 1/25 second.

When the shutter is set for B or Bulb (a term surviving from the days when the shutter was operated by a rubber bulb) it stays open as long as the button remains depressed, and closes as soon as the pressure is released allowing the button to return. Bulb is used for comparatively short time exposures, as for example when light conditions do not permit instantaneous exposures. Since it is impossible to hold the camera perfectly still in the hands for any length of time, the camera must be used on a tripod or some other firm support when Bulb exposures are made.

When the shutter is set for T or Time, one inward press on the release opens the shutter, following which a second press is required to close it. In other words, the lens remains open the complete time, however long, between the two operations of the shutter release. Time is used for interior work or under any conditions for which very long exposures are necessary. Bulb and Time exposures should not be made of moving objects. Neither should the release button be jerked when the shutter is opened, for any motion of the camera will cause an unsharp image.

When using a cable release, pull out the vertical footrest (5, Fig. 1) and insert the release through the hole underneath the footrest.

In order to view the operation of this diaphragm, set the shutter speed on Time and press down once on the shutter release. Then, with the shutter open, move the diaphragm lever back and forth slowly, and you will be able to observe the change in the size of the opening as the lever moves.

You will notice that as the numbers increase from 6.3 to 32 the opening gets smaller, thereby allowing less light to reach the film.

The stops or settings indicated along the bottom of the shutter face plate are standard openings in the Focal or f System," and are of known exposure value regardless of the size or make of camera. They are referred to as f:6.3, f:8, f:11, f:16, f:22 and f:32.

From the Depth of Field Table you will notice that the depth of field not only decreases with the larger lens stops but also decreases when you are focusing on near objects. Therefore be very careful to focus as accurately as possible when taking pictures at distances under ten feet.