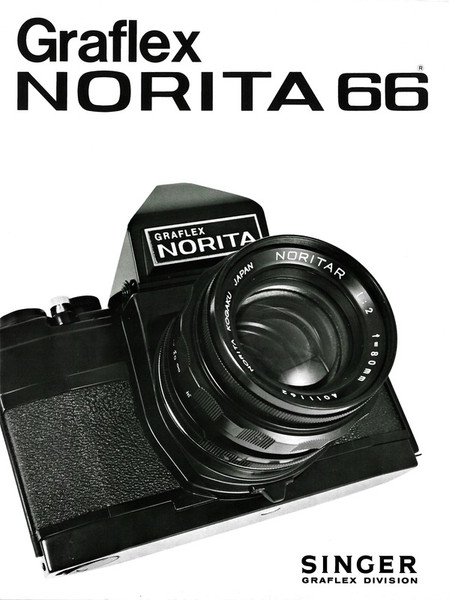 The NORITA 66 was conceived and designed keeping in mind the rigid requirements of the professional photo-journalist and industrial photographer.

ONE OF THE WORLD’S GREAT NEW CAMERAS
JUST CHECK ITS ADVANTAGES!

First, there is size. It is little more than an oversized 35mm camera in weight and dimension. The NORITA 66 gives you, however, 400 percent greater film area 2¼) in a camera only 18 percent larger than any 35mm unit. Nearly two pounds lighter than the other medium format SLR’s.

Next, there is a SUPER-SPEED F/2.0 80mm lens interchangeable via a breechlock bayonet mount and supplied as standard equipment. Fastest in its class, this lens augments the prism finder brightness and has maximum resolution, contrast, and acutance for best results with black-and-white or color film. All aperture, depth of field, and distance markings are clearly visible from the top.

The NORITA 66 provides a precision lightweight pentaprism as standard. Here is the first true eyelevel focus and viewing capability in its class. The pentaprism is easily interchangeable for a hood with built-in critical focus magnifier used to focus and sight at waist level, or in an overhead position. Correction diopter lenses are available for the pentaprism.

Precision focus is achieved with a microprism rangefinder incorporated in the center of the fine-grained ground glass viewing and focusing screen. A split-field rangefinder spot area groundglass will be available as an option.

Film path is the normal “C” configuration. The film travels from the film-spool to the take-up spool without reverse curl. And, the film chamber is built to handle either 120 or 220 film, for 12 or 24 exposures, without any accessories.

Most important, the film is held flat with platelike precision in the glassless chamber. A double rail film track, similar to those in the finest 35mm cameras, give the film room to “breathe” and a chance to settle into the ideal film focus position.

Then, there is its fast-action handling convenience. A rapid film transport lever speeds “shooting”—it advances the film to final position and cocks the focal plane shutter in split-seconds. An exposure counter registers the shot sequence and the shuttercocking mechanism disengages after the last shot to prevent shooting without film.

Focal plane shutter speeds follow the best miniature camera design, and are in two groups: A) bulb to 1/30th second; B) 1/60th to 1/500th second—and Strobe (X) at the fast 1/40th second. Strobe is on a special “click-stop” of the speed selector dial.

The shutter speed selector dial moves left to right before or after the shutter winding—and, is not lifted.