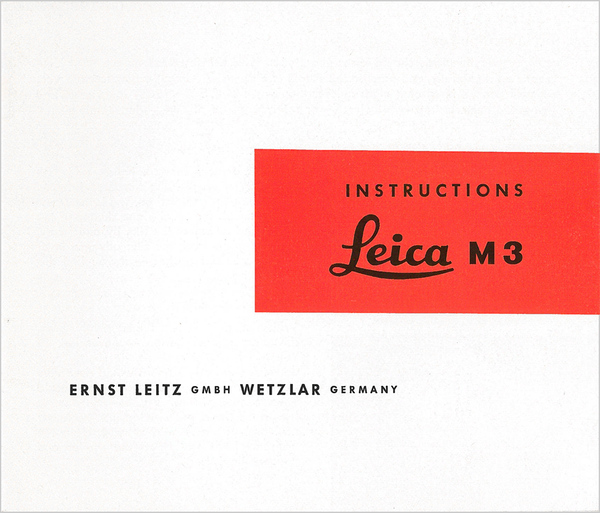 contains everything you should know about your ®LEICA M3. Please devote some time to reading it carefully, and practise the simple operations — without a film, to start with. You will get the hang of it much quicker than you thought. The LEICA is an advanced high-grade camera, but nevertheless — or rather because of that — amazingly simple to handle.

Hold the camera in both hands, and with the right thumb pull the transport lever to the right as far as it will go. The lever movement tensions the focal plane shutter of the LEICA and advances the film by one frame. You may also work the film advance lever by several short strokes — if you find this more convenient.

With the right index finger gently press down the release button — never jerk it! You will hear the click as the shutter runs down. A film in the camera would now have been exposed, in other words you would have taken a picture.

Let go off the release button (lift the finger off), and you can once more operate the transport lever to tension the shutter and advance the film.

For exposures with slow shutter speeds you must of course have a firm support. A tripod is ideal in conjunction with a cable release with lock. Screw in the cable release without pressing the button. The handy LEITZ table stand is very useful when travelling.

is coupled with the transport lever. If the film was correctly loaded (see notes on pages 24–26), the film counter indicates the number of exposures made. The counter stops at No. 40, and automatically returns to its initial position when you withdraw the take-up spool.

controls the exposure times. The engraved figures stand for fractions of a second thus 1000 indicates 1/1000 second, 125 is 1/125 second, 4 is 1/4 second, and 1 stands for 1/1 second, i.e. 1 second. The dial engages of each position when the set shutter speed is opposite the small index line, and remains at this setting. You can therefore set or read off the speeds equally well before or after tensioning the shutter. When set to “B”, the shutter remains open as long as the release button is depressed.

The electric exposure meter LEICAMETER “MC” couples to the shutter speed dial as shown on pages 20–22.

To remove the lens, hold the camera in your left hand, pressing the button of the bayonet lock with the thumb. Grip the lens by the focusing ring with your right hand, as close as possible to the camera body, and turn anti-clockwise to release the lens. This can now be lifted out of the mount. Lenses fitted with an infinity lock should be locked at infinity during changing.

A red dot is visible next to the bayonet lock button. When an alternative lens is to be inserted, place it in position with the red dot on the lens mount opposite the red dot on the camera body. Then secure the lens by turning it clockwise until the bayonet lock engages with an audible click. Avoid changing lenses in strong direct light. Turn your back to the sun, and hold the camera opening towards your body. If you keep the camera and lens separately use a protective cap for each.

An optical finder attachment fits onto the top of the lens mount for use within the near range. This adapts the coupled view- and rangefinder for close-up focusing. The lens thus acts at the same time as a close-up focusing mount with parallax compensation. The lens is inserted into the LEICA M3 – without the finder attachment — in the usual way by placing the red dots on mount and body opposite each other, and turning clockwise to lock.

Focusing between 35 and 19 inches (88 and 48 cm). The distances are measured from the back of the camera to the subject. Set the focusing mount of the lens to its near limit of 3½ feet (1 metre), as shown in Fig. 1, pull outwards, and move it across the stop into the 35 inch (88 cm) position (Fig. 2). The lens remains locked in this position until the optical finder attachment is fully pushed home in its special fitting, thus releasing the focusing movement for the close-up range (Fig. 3).