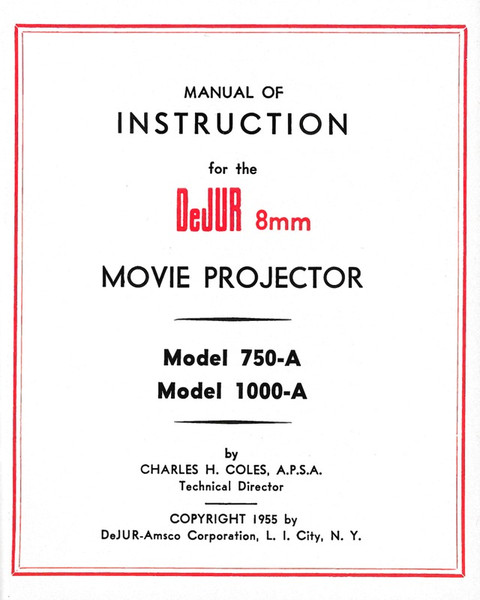 Q. Can I run my machine at less than 16 pictures per second?
A. Yes, you can, but this will shorten the life of your projection lamp and may cause the machine to overheat. It is not recommended.

Q. I turned my machine on but the film would not run. The motor runs and the lamp lights, however. Whats wrong?
A. The machine is in the Still position. Rotate knob (7, Fig. 8) in a counterclockwise direction and the machine will start.

Q. My machine stalls on rewinding. What should I do?
A. Turn the speed control knob all the way to the right as far it will go.

Q. My machine jams and refuses to run after rewinding the film. Why?
A. Turn the threading knob by hand (2, Fig. 8). Turning this knob either to the right or to the left will eliminate jamming. This condition causes no damage whatever.

Q. My machines loses the lower loop. Anything wrong?
A. Generally loss of loop is caused by poor splices. Sometimes the lower sprocket film guard has not been moved to the proper position. This should always press on the film when the machine is operating.

Q. Film rewinds too slowly. Whats wrong?
A. First, be sure the rapid rewind knob (8, Fig. 8) has been turned as far as it will go to the right. This engages the high speed rewind which will automatically disengage when the machine is reversed for normal projection. Be sure the speed control knob on the control panel is turned to the right otherwise the machine may rewind too slowly.

Q. The pictures jump on the screen and sometimes the film tears?
A. All standard motion picture film made for 8mm cameras generally will not cause this trouble. However, there has been available some reprocessed film originally designed for 16mm which will cause this trouble because the perforations inserted during reprocessing are not properly spaced. Only standard 8mm film manufactured by a recognized company should be used. We can not be sure the machine will perform satisfactorily on other than standard film. Sometimes poor splices cause the film to jump or the projector to lose its loop. Do your splices carefully and be sure you make them with a good splicer.

Q. My machine drips oil. Why?
A. You have been over diligent in observing our instructions to oil the machine frequently (but sparingly). The machine should not be flooded with oil. One or two drops is required and it is best to oil a machine immediately after use. Wipe excess oil from the machine. Be particularly careful that you keep oil away from the lens and film track. Notice that there are no oil holes or oil instructions for these parts. Always open the machine for threading when oiling the three bearings on the lens side.

Q. My pictures are fuzzy. Little worms crawl around along the side and top of the picture. Why?
A. The aperture plate is dirty, see section 11.

Q. When I throw my projector to the still picture position, sometimes I get a picture and sometimes the screen is dark. Why?
A. When you stop your machine, you might stop it in such a way that the shutter covers your film. Rotate the threading knob slightly and the picture will flash on the screen. For full intructions, see section 9.

Q. What kind of oil should I use to lubricate my projector?
A. Use DeJUR projector oil which is supplied with machine. More oil is obtainable from DeJUR-Amsco when needed.