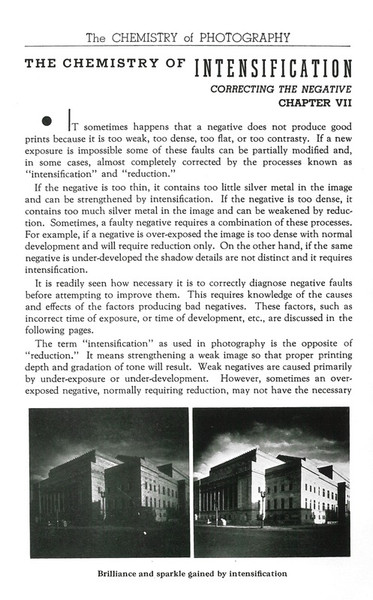 The Chemistry of Intensification

The term “intensification” as used in photography is the opposite of “reduction.” It means strengthening a weak image so that proper printing depth and gradation of tone will result. Weak negatives are caused primarily by under-exposure or under-development. However, sometimes an overexposed negative, normally requiring reduction, may not have the necessary contrast and by certain intensification methods can be built up to a higher degree of contrasting tones.

The intensification methods commonly used to increase the opacity of a weak negative accomplish their results in two steps. The image is first converted (oxidized) into compounds which are then readily changed (reduced chemically) by another solution to opaque metals and insoluble salts giving varying degrees of intensification. Mercury, Chromium, Uranium Ferrocyanide, etc., are all more opaque than silver.

To save time and money it is wise to first determine whether the negative can be intensified. If the weak negative is caused by decided under-exposure no process will help it as there is no complete image to intensify. If, however, the exposure has been sufficient to form even the faintest image, certain processes, such as the Uranium type and Silver type, will strengthen the weak detail enough to save otherwise worthless negatives.

Prints from an underdeveloped negative lack contrast and detail. Under-development can usually be determined by faint signs of the image in the shadows, with visible though small gradation of tones from light to shadow.

Such a negative may be intensified quite satisfactorily. The complete image is in the negative with all its detail if it has been properly exposed, but the process started in the developing bath was stopped too soon and must be indirectly continued.

Prints from an under-exposed negative are harsh and unpleasing. There is little or no detail as the time of exposure was too short to form a complete image in the gelatin. It may be improved slightly by intensification but, if the detail is in the negative, intensification will bring it out... (continued)