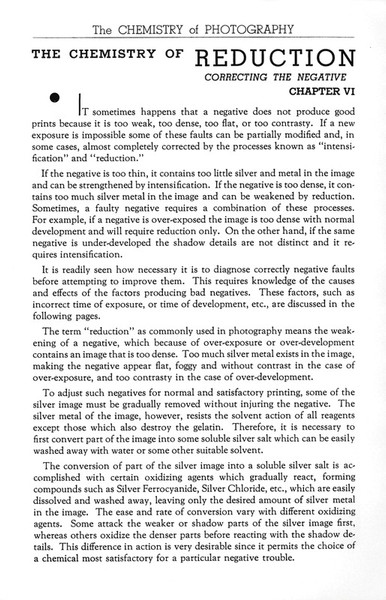 The Chemistry of Reduction

It sometimes happens that a negative does not produce good prints because it is too weak, too dense, too flat, or too contrasty. If a new exposure is impossible some of these faults can be partially modified and, in some cases, almost completely corrected by the processes known as “intensification” and “reduction.”

If the negative is too thin, it contains too little silver and metal in the image and can be strengthened by intensification. If the negative is too dense, it contains too much silver metal in the image and can be weakened by reduction. Sometimes, a faulty negative requires a combination of these processes. For example, if a negative is over-exposed the image is too dense with normal development and will require reduction only. On the other hand, if the same negative is under-developed the shadow details are not distinct and it requires intensification.

It is readily seen how necessary it is to diagnose correctly negative faults before attempting to improve them. This requires knowledge of the causes and effects of the factors producing bad negatives. These factors, such as incorrect time of exposure, or time of development, etc., are discussed in the following pages.

To adjust such negatives for normal and satisfactory printing, some of the silver image must be gradually removed without injuring the negative. The silver metal of the image, however, resists the solvent action of all reagents except those which also destroy the gelatin. Therefore, it is necessary to first convert part of the image into some soluble silver salt which can be easily washed away with water or some other suitable solvent.

The conversion of part of the silver image into a soluble silver salt is accomplished with certain oxidizing agents which gradually react, forming compounds such as Silver Ferrocyanide, Silver Chloride, etc., which are easily dissolved and washed away, leaving only the desired amount of silver metal in the image. The ease and rate of conversion vary with different oxidizing agents. Some attack the weaker or shadow parts of the silver image first, whereas others oxidize the denser parts before reacting with the shadow details. This difference in action is very desirable since it permits the choice of a chemical most satisfactory for a particular negative trouble... (continued)