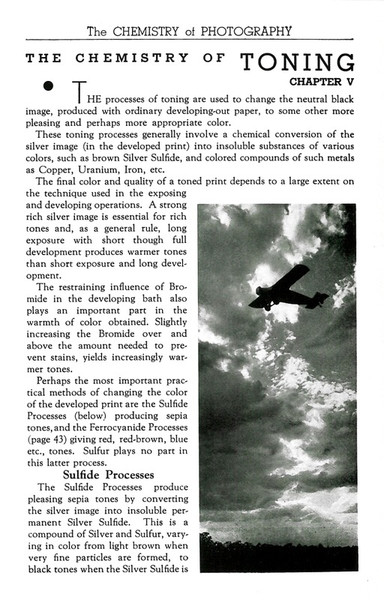 The Chemistry of Toning

The processes of toning are used to change the neutral black image, produced with ordinary developing-out paper, to some other more pleasing and perhaps more appropriate color.

These toning processes generally involve a chemical conversion of the silver image (in the developed print) into insoluble substances of various colors, such as brown Silver Sulfide, and colored compounds of such metals as Copper, Uranium, Iron, etc.

The final color and quality of a toned prim depends to a large extent on the technique used in the exposing and developing operations. A strong rich silver image is essential for rich tones and, as a general rule, long exposure with short though full development produces warmer tones than short exposure and long development.

The restraining influence of Bromide in the developing bath also plays an important part in the warmth of color obtained. Slightly increasing the Bromide over and above the amount needed to prevent stains, yields increasingly warmer tones.

Perhaps the most important practical methods of changing the color of the developed print are the Sulfide Processes (below) producing sepia tones, and the Ferrocyanide Processes (page 43) giving red, red-brown, blue etc., tones. Sulfur plays no part in this latter process.

The Sulfide Processes produce pleasing sepia tones by converting the silver image into insoluble permanent Silver Sulfide. This is a compound of Silver and Sulfur, varying in color from light brown when very fine particles are formed, to black tones when the Silver Sulfide is... (continued)

This chapter provides eighteen (18) pages of vintage toning formulas, including:

For dependable economical work on a large scale, the following direct processes are valuable. They have the advantage of requiring only one solution for the operation and as they all contain Hypo as one of the toning reagents, perfect washing to eliminate this chemical is not as necessary as with the indirect processes.

One disadvantage of these direct Sulfur processes arises from the need of warm or hot solutions to speed up otherwise extremely long reactions. At normal temperatures complete toning by these processes requires twelve hours Or more, whereas with hot baths up to 120° Fahrenheit, complete tuning is obtained in approximately 30 minutes, depending, of course, on the particular formula, paper, etc., used. Another disadvantage is the need for proper heating facilities which must be under definite control. The hot baths also generate disagreeable Sulfur vapors which attack and destroy any sensitized material stored in the room. Good ventilation is necessary.

Caution: Sharp changes of temperature in successive baths are ruinous. Always allow prints to cool before washing or blistering and frilling may cause trouble in the following direct sepia toning processes.

(Re-development)
The indirect Sulfur processes produce sepia tones at normal temperatures without the disagreeable evolution of Sulfur vapors which accompany the direct processes.

There are several methods in common use, among them being:

There are a few colored compounds such as Copper Ferrocyanide, Uranium Ferrocyanide, Iron Ferrocyanide. etc" into which the silver image may be wholly or partly converted yielding red, reddish-brown, blue, etc., prints.

Many formulas with various combinations and manipulations have been worked out in detail to produce permanent results in a wide variety of shades. In addition to containing Potassium Ferricyanide and the soluble salt of a metal, small amounts of organic acids such as Tartaric, Citric (or their salts) are used in the baths to regulate the action and prevent stains. They form complex molecules with the soluble salts, restraining the deposition of the colored Ferrocyanide salts.