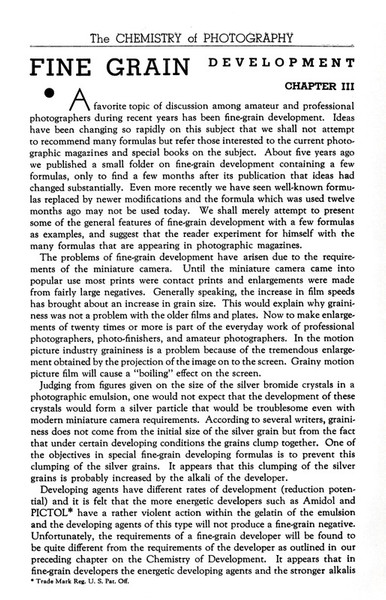 A favorite topic of discussion among amateur and professional photographers during recent years has been fine-grain development. Ideas have been changing so rapidly on this subject that we shall not attempt to recommend many formulas but refer those interested to the current photographic magazines and special books on the subject. About five years ago we published a small folder on fine-grain development containing a few formulas, only to find a few months after its publication that ideas had changed substantially. Even more recently we have seen well known formulas replaced by newer modifications and the formula which was used twelve months ago may not be used today. We shall merely attempt to present some of the general features of fine-grain development with a few formulas as examples, and suggest that the reader experiment for himself with the many formulas that are appearing in photographic magazines.

The problems of fine-grain development have arisen due to the requirements of the miniature camera. Until the miniature camera came into popular use most prints were contact prints and enlargements were made from fairly large negatives. Generally speaking, the increase in film speeds has brought about an increase in grain size. This would explain why graininess was not a problem with the older films and plates. Now to make enlargements of twenty times or more is part of the everyday work of professional photographers, photo-finishers, and amateur photographers. In the motion picture industry graininess is a problem because of the tremendous enlargement obtained by the projection of the image on to the screen. Grainy motion picture film will cause a "boiling" effect on the screen.

Judging from figures given on the size of the silver bromide crystals in a photographic emulsion, one would not expect that the development of these crystals would form a silver particle that would be troublesome even with modern miniature camera requirements. According to several writers, graininess does not come from the initial size of the silver grain but from the fact that under certain developing conditions the grains clump together. One of the objectives in special fine-grain developing formulas is to prevent this clumping of the silver grains. It appears that this clumping of the silver grains is probably increased by the alkali of the developer.

Developing agents have rates of development (reduction potential) and it is felt that the more energetic developers such as Amidol and PICTOL* have a rather violent action within the gelatin of the emulsion and the developing agents of this type will not produce a fine-grain negative. Unfortunately, the requirements of a fine-grain developer will be found to be quite different from the requirements of the developer as outlined in our preceding chapter on the Chemistry of Development. It appears that in fine-grain developers the energetic developing agents and the stronger alkalis...