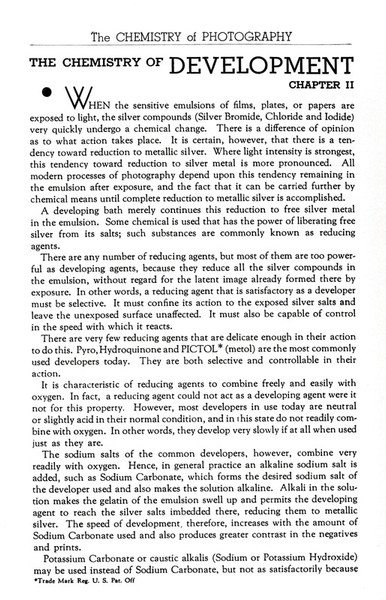 The Chemistry of Development

When the sensitive emulsions of films, plates, or papers are exposed to light, the silver compounds (Silver Bromide, Chloride and Iodide) very quickly undergo a chemical change. There is a difference of opinion as to what action takes place. It is certain, however, that there is a tendency toward reduction to metallic silver. When light intensity is strongest, this tendency toward reduction to silver metal is more pronounced. All modern processes of photography depend upon this tendency remaining in the emulsion after exposure, and the fact that it can be carried further by chemical means until complete reduction to metallic silver is accomplished.

A developing bath merely continues this reduction to free silver metal in the emulsion. Some chemical is used that has the power of liberating free silver from its salts; such substances are commonly known as reducing agents.

There are any number of reducing agents. but most of them are too powerful as developing agents, because they reduce all the silver compounds in the emulsion, without regard for the latent image already formed there by exposure. In other words, a reducing agent that is satisfactory as a developer must be selective. It must confine its action to the exposed silver salts and leave the unexposed surface unaffected. It must also be capable of control in the speed with which it reacts.

There are very few reducing agents that are delicate enough in their action to do this. Pyro, Hydroquinone and PICTOL* (metol) are the most commonly used developers today. They are both selective and controllable in their action.

It is characteristic of reducing agents to combine freely and easily with oxygen. In fact, a reducing agent could not act as a developing agent were it not for this property. However, most developers in use today are neutral or slightly acid in their normal condition, and in this state do not readily combine with oxygen. In other words, they develop very slowly if at all when used just as they are.

The sodium salts of the common developers, however, combine very readily with oxygen. Hence, in general practice an alkaline sodium salt is added, such as Sodium Carbonate, which forms the desired sodium salt of the developer used and also makes the solution alkaline. Alkali in the solution makes the gelatin of the emulsion swell up and permits the developing agent to reach the silver salts imbedded there, reducing them to metallic silver. The speed of development, therefore, increases with the amount of Sodium Carbonate used and also produces greater contrast in the negatives and prints.

Potassium Carbonate or caustic alkalis (Sodium or Potassium Hydroxide) may be used instead of Sodium Carbonate, but not as satisfactorily because... continued