Through her father’s association with Royal Society members William Henry Fox Talbot and the astronomer and chemist Sir John Herschel, Atkins learned of the photographic process then being invented. In particular, she was interested in the cyanotype process devised by Herschel in 1842, which can produce an image by what is commonly called sun-printing. The substance to be recorded is laid on paper impregnated with ferric ammonium citrate and potassium ferricyanide. When exposed to sunlight and then washed in plain water the uncovered areas of the paper turn a rich deep blue. Eventually this process, known as blueprinting, was used mainly to reproduce architectural and engineering drawings.

Atkins employed cyanotype to record all the specimens of algae found in the British Isles. The first part of her work, entitled British Algae: Cyanotype Impressions, appeared in 1843; by 1850 she had produced 12 additional parts. During the next three years, Atkins completed the publication with 389 captioned photograms and several pages of text, of which a dozen copies are known. In 1854, Atkins, possibly collaborating with her friend Anne Dixon, produced an album entitled Cyanotype of British and Foreign Flowering Plants and Ferns. Despite the simplicity of her means, Atkins’s project was the first sustained effort to demonstrate that the medium of photography could be both scientifically useful and aesthetically pleasing. 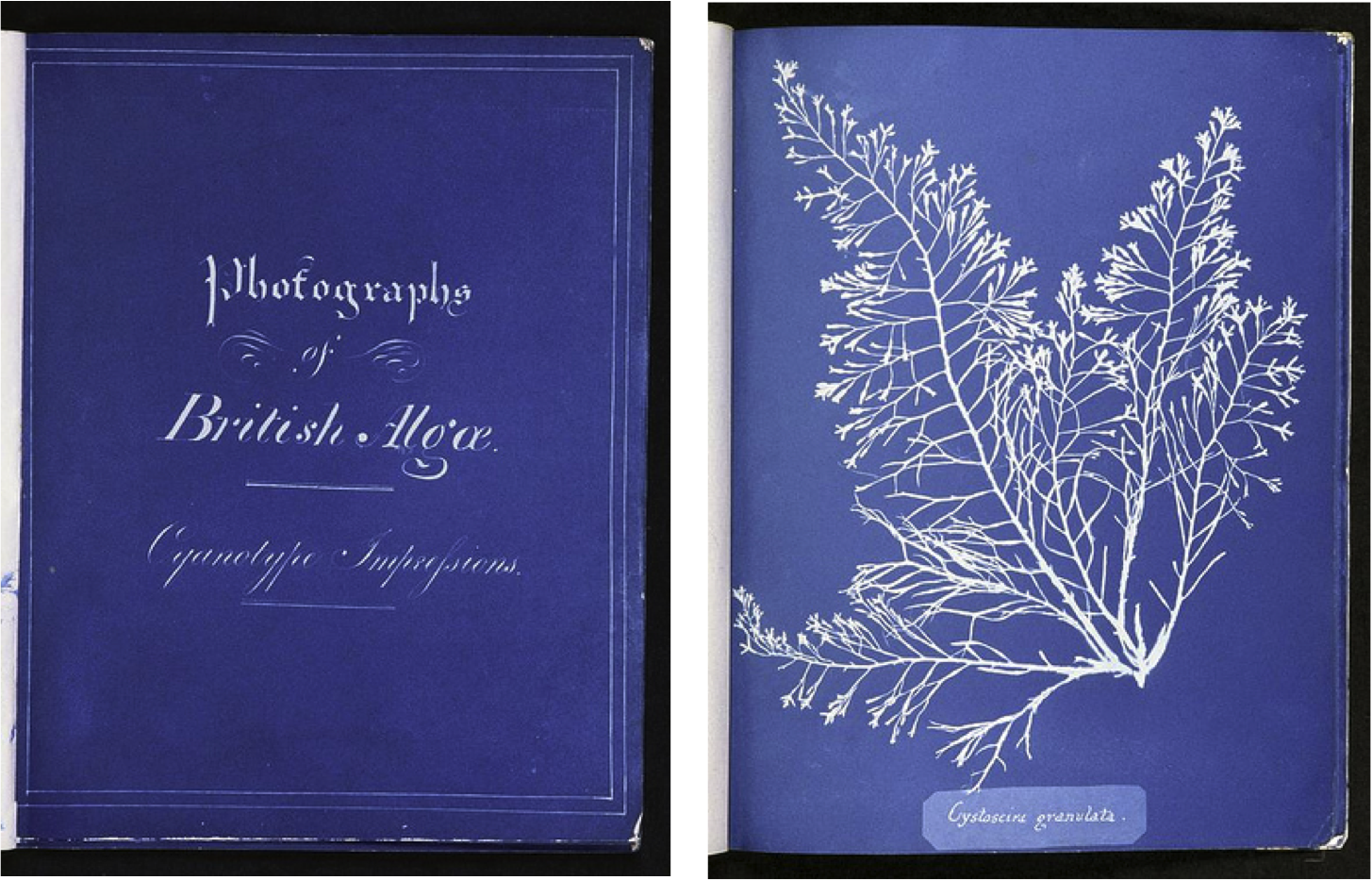 Anna Atkins (née Children; 16 March 1799 – 9 June 1871) was an English botanist and photographer. She is often considered the first person to publish a book illustrated with photographic images. Some sources claim that she was the first woman to create a photograph.

John George Children and John Pelly Atkins were friends of William Henry Fox Talbot. Anna Atkins learned directly from Talbot about two of his inventions related to photography: the “photogenic drawing” technique (in which an object is placed on light-sensitized paper which is exposed to the sun to produce an image) and calotypes. Atkins self-published her photograms in the first installment of Photographs of British Algae: Cyanotype Impressions in October 1843. Although privately published, with a limited number of copies, and with handwritten text, Photographs of British Algae: Cyanotype Impressions is considered the first book illustrated with photographic images. Eight months later, in June 1844, the first fascicle of William Henry Fox Talbot’s The Pencil of Nature was released; that book was the “first photographically illustrated book to be commercially published” or “the first commercially published book illustrated with photographs.”

Atkins produced a total of three volumes of Photographs of British Algae: Cyanotype Impressions between 1843 and 1853. Only 17 copies of the book are known to exist, in various states of completeness.

In the 1850s, Atkins collaborated with Anne Dixon (1799–1864), who was “like a sister” to her, to produce at least three presentation albums of cyanotype photograms:

— From Wikipedia, the free encyclopedia A cyanotype photogram made by Atkins which was part of her 1843 book, Photographs of British Algae: Cyanotype Impressions