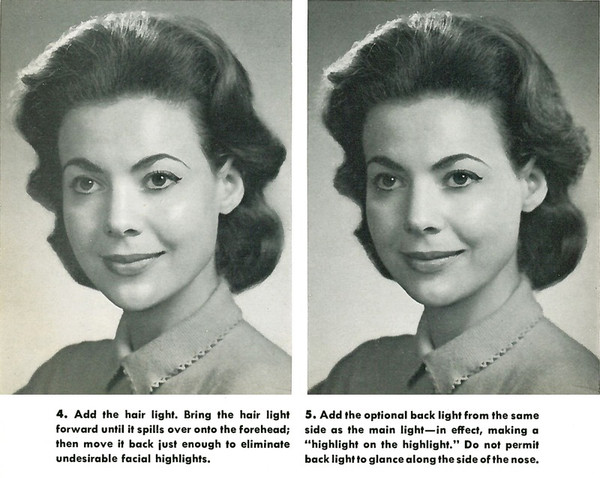 Let’s begin by admitting frankly that the major problem of the portrait photographer is to idealize his subjects. His tools in achieving this end include the pose, camera angle, lighting, and retouching — but of all these, the most pliable is the lighting.

The proper lighting can create modeling and realism: Using the conception that light areas of a print project and dark areas recede, highlights on the five frontal planes of the face (forehead, nose, chin, and both cheeks), with the neck and sides of the face in shadow, helps to lend a desirable third-dimensional effect to the subject.

But, equally important, the lighting can be used to idealize: Facial defects can be obscured in a shadow; a broad nose can be narrowed with a short lighting of the “split” variety. Probably the most basic single principle governing portrait lighting (as well as product photography) is that there should be one dominant light source, with all other lights subordinate and subservient to it. Accordingly, the character and placement of the main, or key, light in relation to the position of the subject is of primary consideration to the portrait photographer. Its placement is used as a means of classifying the three main types of lighting as follows:

1. Broad lighting. The main light illuminates fully the side of the face turned toward the camera. Although this lighting helps to de-emphasize facial textures, it is used primarily as a corrective lighting technique to help widen thin or narrow faces.

2. Short lighting (sometimes known as “narrow” lighting). The main light illuminates fully the side of the face turned away from the camera. This lighting is generally used for the average oval face of either a man or a woman. It tends to emphasize facial contours more than broad lighting and, in conjunction with a comparatively weak light, can be used as “strong” or “masculine” lighting especially adaptable for low-key portraits. Short lighting has the effect of narrowing the face and, therefore, can be used effectively as a corrective lighting technique for round or plump faces.

3. Butterfly lighting. The main light is placed directly in front of the face and casts a nose shadow directly underneath and in line with the nose. Butterfly fighting is used most successfully with a normal oval face and is considered a type of glamour lighting especially suitable for young women. It is not suggested for men because of the way in which the subject’s ears would be highlighted and made undesirably prominent. 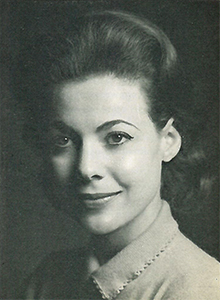 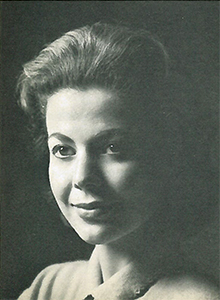 Butterfly Lighting Position
In ordinary head-and-shoulders portraiture, the main light is used three or four feet from the subject. This light should be about one to two feet higher than the subject's head and positioned so that it casts a catchlight in both eyes, as seen from the position of the lens. The exact height of the main light is partially determined by the facial structure. For example, prominent cheek bones are de-emphasized by a main-light position that is slightly lower than normal; a short nose appears longer when the main light is slightly higher than normal.