Agfa Formulas for Photographic Use 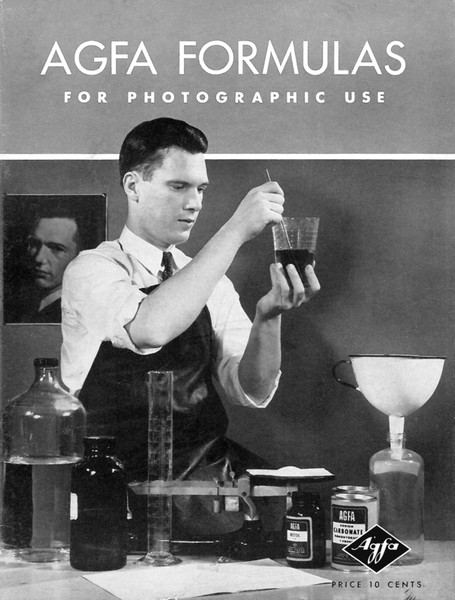 Agfa Formulas for Photographic Use

Chemistry for the Photographer

PHOTOGRAPHERS everywhere realize the importance which chemistry holds in photographic work, but often consider the subject too formidable and involved for application to their own work. This discussion has been prepared to help dispel that fear, and to show that theoretical knowledge is unimportant if the photographer knows in a practical way, what is in a developing or fixing solution, why it is there and how it accomplishes its own particular job.

The general structure of photographic film, its components of nitro cellulose (or acetyl cellulose) base, emulsion coating of gelatin which contains suspended particles of light-sensitive silver salt, and auxiliary layers for such purposes as prevention of halation, are common knowledge among photographers. The chemistry involved in this branch of the science is held under precise control by the manufacturer and causes the photographer little concern. Photographic chemistry begins to affect the photographer more directly in the developing and fixing operations carried out With film and paper. It is therefore well worth while to consider first the composition and function of the developing solution to see What it contains and What it does to effect development.

When a photographic emulsion is exposed to light, the silver salt (silver bromide, chloride or iodide) which the light reaches, undergoes a definite though invisible change to form what is known as the latent image. It is not yet definitely known just how this change takes place, but it is believed that the exposed parts of the emulsion gain a certain—“activation” that makes them susceptible to the reducing action of a developer. When placed in a developing solution the exposed, “activated” particles of silver salt are reduced chemically to black metallic silver, leaving the unexposed particles of silver salt.unchanged. Reduction in this sense does not have the meaning commonly thought of in the photographic field, namely, the lessening density in a film negative. This chemical reduction is a conversion of the silver salt to free silver and for the reaction one or more reducing agents—Which photographers call “developers” are necessary.