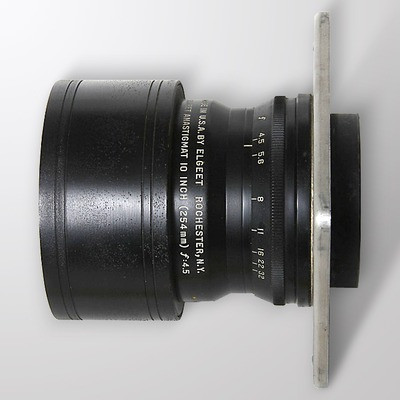 Comes mounted on a standard Graflex 4x5 Speed Graphic aluminum lens board. Also included is an original fitted heavy-duty case, made by the Eagle Lock Company in Terryville, CT.

Elgeet Optical was founded in 1946 by David Goldstein in Rochester, NY, home of Eastman Kodak. Elgeet was best known for its movie camera lenses, but they manufactured at least one still camera telephoto lens, made for the American Clarus Model MS-35 rangefinder camera body. Like the other Rochester based optical legends, Ilex and Wollensak, they largely supplied the lenses for cameras of other manufacturers.

David Goldstein’s sons Julian and Jeremy Goldstein who both lived in Japan and studied Japanese optical manufacturing techniques in the 1980s. The Goldstein brothers purchased Navitar from their father in 1994 and continue to own the company. In addition to providing marketing and sales strategies for Navitar, Jeremy shares strategic and long-range planning activities with his brother Julian, who now focuses on mergers and acquisitions, such as Navitar’s acquisition of the Buhl Optical Company in 1997.